In earlier days, Nadaun seems to be the headquarters of the 'Nadaun Jagir', and the King Sansar Chand of Kangra supposed to use this as his court (a discussion Hall). He has used this place all times of his rule, especially during the summer.

While, the Nadaun is also a holy place, where the 'Bilkleshwar Mahadev Temple' is situated, and this temple has been founded by the 5 Strong Men appear in the epics of Mahabharata (the Pandavas).

There is also a Fort at Nadaun, which is well-known as the Nadaun Fort, where tourists arrive in large numbers to see the structure of the historical fort. Nadaun is also famous for its beautiful Gurudwara that was established in the year 1929 A.D. Wherein, the place of Nadaun was supposed to be a gay place during the ruling period of the Sansar Chand II.

History of Battle in Nadaun

The Battle of Nadaun was fought in the year 1691, between the military force of the King Kirpal Chand of Kangra, as well as the King Dyal of Bijharval in the Sivalik hills and many other neighboring chieftains.

The hill barons gets the benefits from the Emperor Aurangzeb who is associated with the Maratha force in the South side, hesitated to pay the last tributes to the royal treasury. Also, in the early 1691, certain orders were offered to the 'Hifzullah Khan' also known as 'Miari Khan', the Governor of Jammu, who sent a strong force under the Alif Khan.These strong force or the chieftains are namely the king 'Kirpal Chand' and 'Raja Dyal', who became allies of Alif Khan.

Later the King 'Bhim Chand' who belongs to the Kahlur (Currently known as the 'Bilaspur'), started to rally the other rulers to the court of Guru Gobind Singh to seek the help.

The Battle of Guru Gobind Singh

The Guru Gobind Singh arrived with his Sikh force to assist the King 'Bhim Chand'. Then, the two armies came and joined at the bank of the River Beas located in the Nadaun. 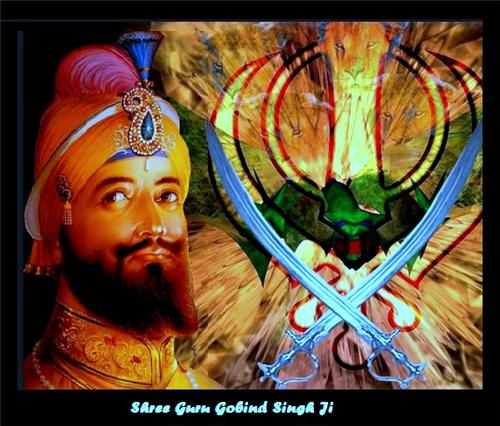 Because of the strongest force of Guru Gobind Singh, the forces of Alif Khan were defeated and thrown in to the river; and Alif Khan flew away.

Guru Gobind Singh described all the actions (battle) that took place in Nadaun, in his poem 'Bachitra Natak'.

Initially, the forces of Kirpal Chand overpowered Bhim Chand's forces. Then, Bhim Chand chanted Hanuman stotras (Prayer), then called his force as well as the Guru for his help. Later, both these parties started to attack the Raja Dayal (a king of Bijharwal) as well as the King Kirpal in this battle. While, the Mughal army and the Kirpal Chand were kicked inside the Beas River, and thereby the Alif Khan and his men flew away.

After the battle ended, Guru Gobind Singh halted in the town of Nadaun for about eight days, then returned to the Anandpur. After which, King Ranjit Singh constructed a Gurdwara on the same location where the Guru Gobind has installed his tent. And this Gurdwara was given the name as the 'Gurdwara Dasvin Patshahi' or the 'Gurdwara Nadaun Sahib'.

This beautiful Gurudwara which has 4 arch shaped doors on all the four sides, of the Gurudwara. While, the Guru Granth Sahib is placed on a high platform, which was got constructed during the year 1929 by the person called Rai Bahadur Baisakha Singh. Currently, maintained by the Shiromani Committee, since the year 1935.

Comments / Discussion Board - History of Nadaun